The federal register document of the final rule can be downloaded here:

In the final rule, USFWS notes their intent to implement the recently pass City of Georgetown Water Quality Ordinance as a Section 4(d) rule as available under the Act for threatened species.  The USFWS opens also opens a 60-day comment period regarding the 4(d) rule on February 24th.

A distribution map of the locations known to USFWS of Georgetown salamander can be viewed here:

aci consulting prepared a map of the area affected by the ordinance that can be viewed here:

The ordinance can be downloaded below:

and the supporting details of setbacks and protection measures (Exhibit A) can be downloaded below:

The timeline for listing dictates that USFWS must determine to list or not list the species by February, 2014.

If you have questions regarding the recent Georgetown ordinance or the status of the Georgetown salamander, please contact aci consulting’s Austin office.

According to The Advocate for the Texas Commission on Environmental Quality, the recently reissued TPDES Construction General Permit – TXR150000 for stormwater discharges became effec­tive March 5, 2013. All authorizations issued under the previous general permit expired whether or not a Notice of Termination was submitted.

Operators of large construction activi­ties authorized under the expired permit have 90 days to submit a new Notice of Intent (NOI) and application fee to obtain coverage under the new permit. The deadline to renew permit coverage for sites that have not reached final stabilization is Monday, June 3, 2013.

Operators of both large and small construction activities must develop a new Stormwater Pollution Prevention Plan (SWP3) to address any new permit requirements applicable to their sites.

Smaller construction activities are regulated under the CGP though a permit application and fee are not required.
Operators may obtain immediate coverage using the State of Texas Environmental Electronic Reporting System for submitting stormwater forms and payment. For information about creating and using a STEERS account, click here.

More information about the CGP is available here. 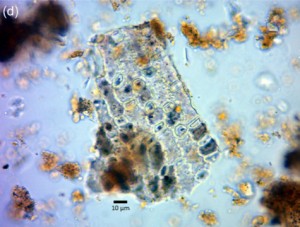 I was recently published in the Holocene and wanted to share my work.

Climatic fluctuations that occurred in North Africa during the early and middle Holocene had a profound impact on the environment of the region and would have required human populations in the area to adapt their subsistence and economic strategies in equally significant ways. Capsian groups, located in eastern Algeria and southern Tunisia from approximately 10,000 to 6000 cal. BP, were among the last North African foragers at a time when other groups were abandoning food collection to engage in food production in the form of pastoralism. Capsian foragers relied heavily on land snails, but we have little information on their use of plant resources, which can be an important indicator of economic adaptation to environmental change. In this study we use phytolith analyses at the Capsian site of Aïn Misteheyia in eastern Algeria to track the changes in subsistence strategies throughout much of the middle-Holocene climatic transitions. Our results show that Capsian foragers exploited plants such as sedges and small-seeded grasses from wetland microenvironments within their home ranges which allowed them to demonstrate robust and resilient resource procurement strategies, and maintain a foraging lifestyle resistant to major fluctuations in climate.

I came across this interesting article from the Department of Interior news, published in the Federal Register. It includes the proposed revision of Critical Habitat for the Comal Springs Dryopid Beetle, Comal Springs Riffle Beetle, and Peck’s Cave Amphipod. Click here to read the article.

Image above courtesy of National Geographic.